Why I feel smart classes are not that smart? 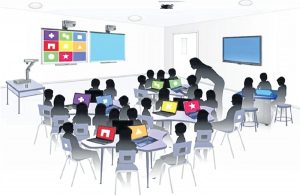 Smart classes are a norm now and there is nothing left to boast about them either. They came in the early years of the last decade and are still making inroads into the 1.5 million schools operating in India.

I am glad, I was out of school by then when they struck, as I am not in favor of them invading the blackboards.  Reason being simple.

Why are they called smart classes in the first place- just because they are run on computer and have every content on digital media… So how does it make them smart.. Aren’t they the new version  of idiot box , this time installed in classroom.

They completely kill the objective of teaching the kid… b’coz its one side interaction… earlier it as just the teacher yapping away all the information she had, now its the so called smart board that does the yapping of the content….

I think then we can completely abolish schools and just keep the exams for the children to come and clear the various levels of learning…(well that too can happen.. and I suppose will eventually happen, with the augment of technology in every sphere of our lives, will write about this idea in another blog ) but until it happens, we need to find a way where we can use smart classes and teachers in a symbiotic role… smart classes should not make us dumb but help the student understand the concept with the visual aid available to them.

If we do not resolve the problem highlighted then I suppose our goal of developing Higher Order Thinking Skills or following any modern pedagogic method which talks about developing HOTS will fail miserably in achieving its goal.