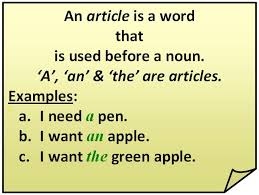 Objectives to be achieved
To help them differentiate the sounds made by vowels and consonants .Give them the concept of definite and indefinite articles .

Underlying Concept behind this activity
To bring out the finesse of a language which goes beyond just conveying meaning .

Resources required for conducting the activity
Some flash cards with pictures / words depicting nouns prefixed with article a,an and the .
Some authentic pieces of information such as newspaper cuttings, paragraph from book or magazines displaying use of articles .

AStep 1 . Call out a few objects from the class room and ask the students to sort the ones with article  ‘a ‘ before them and article ‘ an ‘ bofore them and write in the notebook .
Step 2 . Ask them to find the difference and put them under two different columns as article ‘ a ‘ and article ‘ an ‘
Step 3 . Tell them that all  the alphabets are divided in two groups called vowels and consonants .
Step 4 . Call out vowels demonstrating the single sound produced by them and tell them to repeat it .
Step 5 . Now choose the consonants and demonstrate the double sound produced by a consonant .
Step 6 . Now ask them to look at the list of words they have before them and observe which words have  ‘ a’ and which ones have ‘ an ‘
Step 7 . Ow ask them to recall aor make a list of ten to fifteen nouns beginning with vowel and consonants each .
Step 8 . At this point it would be better to introduce the exceptions like ‘an hour ‘ ‘ a ‘ one rupee note , a European or a useful thing etc .
Step 9 . Now you can ask them to listen very carefully to the beginning sounds made by the words …one ..,European …hour and useful .They should be able to tell you that first sound is consonant or double sound that’s why the exception .
Step 10 . Once again  make a few statements based on classroom conditions to bring out the use of article the . For example : –  Ruby switch off the fan .
Give the pen I used yesterday . The apple I ate yesterday was very sweet .
Explanation :- 1 The nouns in bold are not any one of the many but specific nouns which the speaker means . Hence use of article  ‘ the ‘ .
2 . I met a boy running in the street . The boy was sweating due to heat .
Explanation :-  When a noun is referred to again in a sentence we use the before it as it becomes a specific object or person . Therefore articles ‘a’ and ‘an’ are indefinite articles as they are used to indicate any one out of many or one thing or person . But the is a definite article as it is used to indicate a specific person ,place or thing .
There are many other things where article is used such as ; unique things ,newspapers ,names of mountains, rivers ,planets , important words in a title etc . These can be taken up in another session .
To assess the learning outcome give exercise .

Uploaded File
Brainstorming questions asked in class
Why do we use a before a horse and an before an hour ?
Why do we put the before a noun when it is repeated ?

Impromptu changes made if any during activity, reasons
Changes can be made to suit the the requirements and conditions prevailing in the particular class .

Any suggestions for other teachers while implementing this activity in classroom.
Teachers can start the activity by giving an explanation first .
Drill followed by explanation .

← Rule for Algebra- Understanding Why they exsist Greater than Concept →