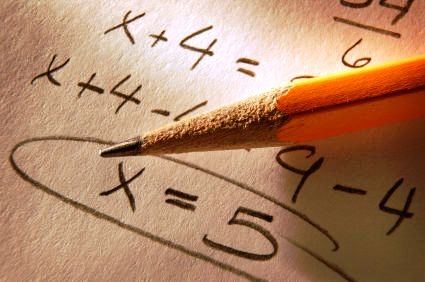 Underlying Concept behind this activity
When students make the transition from concrete arithmetic to the symbolic language of algebra, they develop abstract reasoning skills necessary to excel in math and science. This concept can easily be explained as Algebra being a way to solve the missing links in a puzzle.

Step 1: What is Algebra?

Don’t be suspicious of the big, heavy word – Algebra. Algebra is just a friend you haven’t made yet.

We all know numbers. We all know what all we can do with numbers. We can add, subtract, multiply and divide them, right? All that is called Arithmetic. Arithmetic is about combining numbers.

Step 5: But do you know we can write all of the above operations horizontally as well? Here we go:

Step 6: Now the above problems have become EQUATIONS.

An equation has two sides with an “=” in the middle and ‘something’ in it is unknown, at least till the time we find it.

The equation can be more complex than examples shown above. For instance:

Now, Algebra is something that involves equations and here the ‘something’ can be anywhere, not necessarily on the right hand side of ‘=’ and alone. Like:

That is to say, if you double a number and subtract 11 from it, you get 9.

The ‘something’ can be in more than one place too:

And you know what, there can be more than one ‘something’s in an equation. But we don’t call them ‘something’, we call them a variable and we treat them as we would treat any other number like 6 or 10. We usually write x, y, z etc. to denote variables. So the above equation will become:

A combination of letters (variables) and numbers is called an Algebraic Expression.

An equation is where one expression equals another.  And our job is to find the variable(s).

So basically, algebra is the study of how to handle expressions so we can find the variable(s). That has to be done according to some rules. We’ll learn about those rules as we go along.

Till then, what are the simplest expressions?

Some Practice equations can be given to solve in class.

Uploaded File
Brainstorming questions asked in class
Can this statement be true?
x+1= 0
Explain why?


Any suggestions for other teachers while implementing this activity in classroom.


← Speaking skill – topic – Cricket a Craze in India How to solve a Case Study ? →