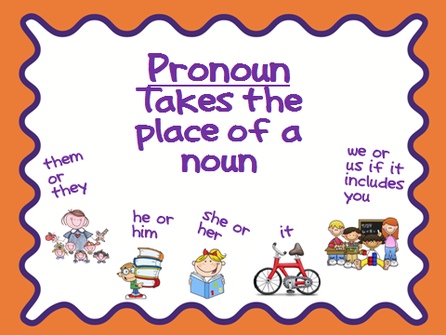 Underlying Concept behind this activity
Understanding the use of pronouns to make communication natural , spontaneous and add finesse to it .

Step 1. Read or write a few sentences with pronouns in it .

Step 2. Ask the students who they represent or point to in a sentence .

Step 3. Rewrite the sentence using the noun instead of the pronoun .

2 Prakash go and get Prakash’s book . Book is on the table .

Q. Which of the two sentences is better ?

Q2What is odd in the second sentence ?

Explanation : Pronouns are the words used in place of nouns .

We never use a pronoun for the first time . It is always used in place of a noun .

Example : He is absent today .

‘ He ‘ has no identity therefore will lead to the question who ?

We have to precede the sentence with a noun . We will write …Where is Ramesh ? Ans will be … He is absent today .

Write down the personal pronouns and use them in sentences  and ask who are they being used for .

Ravi , why didn’t you do your homework ?

Like this ask a few questions using different type of pronouns .

‘ It ‘ is usde for no living things and animals .

Trees are our friends .

They help in keeping the environment fresh and cool .

Ask them to identify the pronouns and the nouns they have been used for .

Now also introduce the singular and plural forms of pronouns with their use in sentences .

Give a mixed list of these pronouns and ask them to separate the singular from plurals .

Uploaded File
Brainstorming questions asked in class
What do we use in place of a noun ?
Which pronoun is used for non living things and animals ?
What is the plural for he , she and it ?

Impromptu changes made if any during activity, reasons
It is done to suit the class requirements and level of students .

Any suggestions for other teachers while implementing this activity in classroom.
One can follow different approaches which may include direct method of using the language and then give explanation or explanation followed by practice .