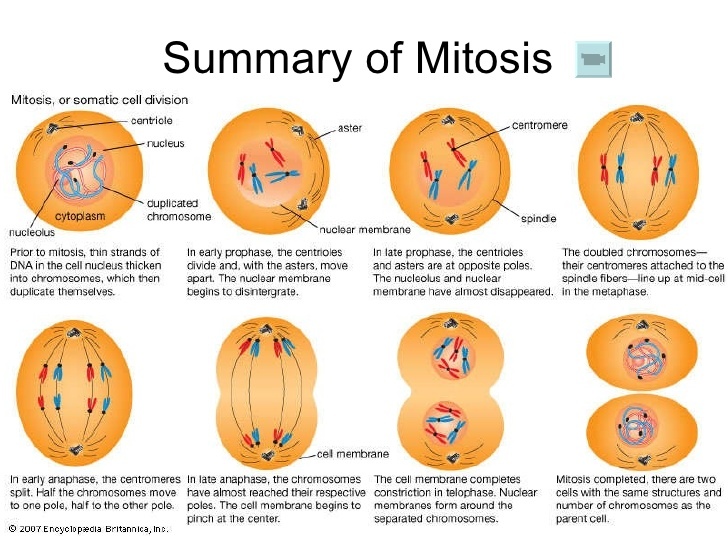 Objectives to be achieved
1. Introduce students to cell division called Mitosis2.Make them familiar with the terms like Interphase, Prophase, Metaphase, Telophase, and Cytokinesis various steps in this process.

Underlying Concept behind this activity
Students need to understand that Mitosis is a way for the cell to divide and ensure that each new cell has the exact same genetic information.

This activity involves students creating a scientific method fold able where they will be all the material related to Mitosis in  three sections put in three different layers:

Top Layer- Mitosis and its Phases Middle Layer-Picture relating to each phase

The project will contain students to finish the diagram and answer the following questions which will help them brainstorm and understand the importance of this process in cells.

1. Each of the cells in your skin, brain, and other parts of your body has a complete set of chromosomes with the same genes and the same alleles that were present in the single cell that developed into your body.
Explain how these billions of genetically identical cells
were produced.Include the following terms in your
explanation: chromosome, cytokinesis, daughter cell, DNA replication,genes,mitosis, sister chromatids, and spindle fibers.
2. Some animals and plants use a combination of mitosis and splitting off to reproduce. For example,a hydra can reproduce by budding.The bud is formed by many many repetitions of mitosis, and then the bud breaks off to form a daughter hydra. (A hydra is an animal that lives in the water and uses its tentacles to
catch food.) Will there be any genetic differences between the mother hydra and the daughter hydra? Explain your reasoning.
3.Even in an adult ,some cells continue to divide . Why is cell division useful even in an adult who is no
longer growing? (Hint:Think about what happens when you have an injury that scrapes off
some of your skin.) Almost all the cells in our bodies are produced by a type of cell division called
mitosis. In mitosis , one cell divides to produce two daughter cells, each with a complete set of chromosomes. (It may seem odd, but the cells produced by cell division are called daughter cells, even in boys and men.)
4.Before mitosis begins, a cell makes a copy of all the DNA in each chromosome.What would go wrong if a cell did not make a second copy all of its DNA before the cell divided into two daughter cells?
Practice worksheets
Reference Link: https://www.khanacademy.org/science/biology/cellular-molecular-biology/mitosis/a/phases- of-mitosis http://serendip.brynmawr.edu/sci_edu/waldron/pdf/MitosisTeachPrep.pdf


Any suggestions for other teachers while implementing this activity in classroom.
At this level, students need to learn to read and analyse the information that is being given to them. This process happens when they are given projects and assignments which involve HOTS. Else rote learning will not lead to create any interest in the subject.