1. What happens when electric current is passed through a substance and how does it bring in chemical change in the substance?

5. In the experiment, if A is plated with copper, the anode would be 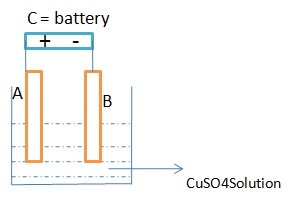 8. In the given filter paper contains starch soaked in potassium, Iodine solution is connected to the battery as shown. When we write on wet paper, it has blue black color.

10. Four substances were tested for their electrical conductivity. The results are shown in the table:

11.  The diagram shows a plotting compass placed above a copper wire when there is no current flowing in the wire. What happened to compass needle when a large direct current flows from point A to point B?