1. How are speed and time related and how can we show them on a graph?
2. How do you calculate speed of any body in motion?
3. How can speed be interpreted with the use of graphs?

3. State how do we measure time interval of a month.

4. State the condition under which the distance-time graph of an object is a horizontal line parallel to the axis of time

2. Write the difference between uniform and non uniform motion.

4. a) Paheli and Boojho have to cover different distances to reach their school but they take the same time to reach the school. What can you say about their speed?

b) If Boojho covers a certain distance in one hour and Paheli covers the same distance in two hours, who travels with a higher speed? Explain

2. Plot a distance-time graph of the tip of the second hand of a clock by selecting 4 points on X-axis and /-axis, respectively. The circumference of the circle traced by the second hand is 64 cm.

3.  A truck travels a distance of 840km per hour using 60 litres of diesel. What is the average speed of the truck?

4. A water pipe is flowing through it. Which of the following changes would increase the speed of the water flow through the pipe? Give reasons for your option.

1. If you did not have a clock, how would you decide what time of the day is?

2. The following figure shows the distance-time graph for the motion of two objects D and E. Which one of them is moving slower?

3. Boojho walks to his school which is at a distance of 3 km from his home in 30 min. On reaching, he finds that the school is closed and comes back by a bicycle with his friend and reaches home in 20 min. Find his average speed in km/h

4. Distance between Bholu’s and Golu’s house is 9 km. Bholu has to attend Golu’s birthday party at 7 O’ clock. He started his journey from his home at 6 O’ clock on his bicycle and covered a distance of 6 km in 40 min. At that point, he met Chintu and he spoke to him for 5 min and reached Golu’s birthday party at 7 O’ clock. With what speed, did he cover the second part of the journey? Calculate-his average speed for the entire journey. 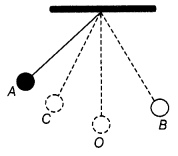 Time taken by the bob to move from A to C is t1 and from C to O is t2. Find the time period of this simple pendulum.